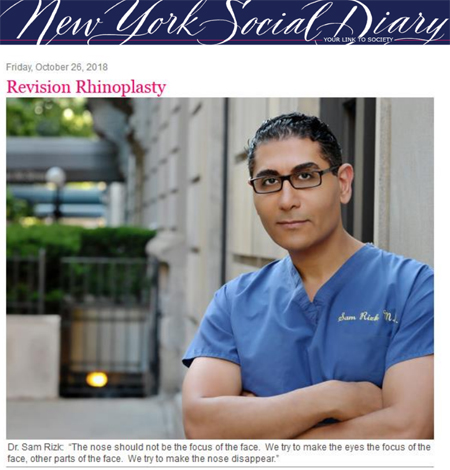 Town and Country magazine compared 15 highly-sought after rhinoplasty experts from around the nation and revealed where their strengths lie. With his artistic nature and meticulous rhinoplasty technique, Manhattan Rhinoplasty expert Dr. Rizk is one of the highest ranked global facial plastic surgery specialist. The double board certified subspecialist has expertise in facial surgery and rhinoplasty. His advanced technique corrects nasal injuries, deformities and improves breathing without noticeable scarring. The Manhattan plastic surgeon has successfully performed thousands of rhinoplasty procedures in his New York office. Dr. Sam Rizk is recognized by Town & Country’s experts for globally rebuilding noses and his uncanny ability to perfect a tertiary nose job.

Dr. Sam Rizk has been chosen as a Top Facial Plastic Surgeon and Rhinoplasty Specialist by Castle Connolly, the #1 Organization which selects Top Physicians. Dr. Rizk is highly experted and often selected by doctors, nurses, and other medical professionals to do their plastic surgery.

Dr. Rizk was a lecturer and panelist in the Master Rhinoplasty section at the 8th Milano Masterclass

Dr. Sam Rizk’s most recent venture to the 8th Milano Masterclass Expedition on Rhinoplasty proves that he is one of the top plastic surgeons in existence. In the Master Rhinoplasty session, he taught a crowd of junior surgeons the various technical aspects of a rhinoplasty, including never-before shared “secrets.” He also lead a group of panelists for the video section of the masterclass with videos about the lessons he’s learned from thousands of primary rhinoplasties. In the masterclass, he was one of the most skilled surgeons, having discussed his expertise in ethnic and middle eastern rhinoplasties. See the article here

Dr. Rizk is featured on RT.com for his professional opinion on patients’ requests for nosejobs in an effort to improve the way they look in selfies.

Dr. Rizk Featured on MedEsthetics as One of NYC’s Top Facial Plastic Surgeons

Dr. Rizk featured on Yahoo! Sports – Clint Dempsey’s dilemma – To mask or not to mask?

The Dangers of Medical Tourism – Dr. Rizk on WPIX

New York double-board facial plastic surgeon Dr. Sam Rizk was interviewed by WPIX about plastic surgery in the Dominican Republic. The article tells the story of a New York mother who went overseas for plastic surgery and died from a blood clot. Dr. Rizk explains how this death could have been prevented and why medical tourism is on the rise. Dr. Rizk believes the surgeon should have waited at least 24 hours after landing before operating on her and performing tummy tuck and liposuction. Patients who choose to undergo plastic surgery in other countries due to low cost, need to ask the right questions and do their homework.

Some issues to bring up during your phone/Skype consultation:

Dr. Rizk Lectures At The Harmonie Club in Manhattan, NYC

Dr. Sam Rizk, a plastic surgeon in New York City, says 1 out of 3 of his rhinoplasty patients have had previous nose jobs. Among the most common problems he sees are “scooped bridges,” over-restricted nostrils, and pinched tips. The number of botched nose jobs he has repaired has soared over the past three to five years as more surgeons are performing the surgery who aren’t well trained or experienced, he says. Industrywide statistics bear out his experience: Revision surgery is up 35% from 2008 to 2012, according to the American Academy of Facial Plastic and Reconstructive Surgery.

Dr. Sam Rizk is featured in Surgical Aesthetics: The Business of Cosmetic Plastic Surgery, where he discusses concierge services he offers his out-of-town patients such as making post operative house calls to their hotel rooms. And as one of the best facial plastic surgeons in New York, it is no wonder Dr. Rizk gets 40% of his business from abroad!

Dr. Rizk in a Live Chat with Huffington Post About Revision Rhinoplasty

Congratulations to our very own Dr. Sam Rizk for being featured in Newsday. Dr. Rizk is named one of New York Magazine’s Best Doctors! As one of the best Manhattan facial plastic surgeons, Dr. Rizk strives to provide advance techniques for his nose job patients to get the most natural results while maintaining patient satisfaction and comfort. Dr. Rizk says “With each rhinoplasty, I construct a natural looking nose grounded on the structure of the cartilage and the overlying skin that will stand the test of time. A natural nose should flow with the other facial features including the upper lip, chin, and cheeks. An important factor in achieving a result that doesn’t appear to have been altered is to maintain good structural support.”

Dr. Sam Rizk is featured in WOW NOW where he talks about the most challenging facial plastic surgery procedure he performs, his 3D High-Definition rhinoplasty technique and how he develops a surgical plan for rhinolasty. As one of the best rhinoplasty surgeons in New York, Dr. Rizk takes into account patients bone structure, skin type, age and ethnic background for each nose job procedure.

Dr. Rizk Featured in Examiner.com – Everything You Need To Know About Plastic Surgery

Dr. Sam Rizk is featured on examiner.com where he answered questions about plastic surgery. Read on to learn more about how to choose a plastic surgeon, the differences between a modified and deep plane face lift, rapid recovery neck lifts, and 3D high definition rhinoplasty from double-board certified facial plastic surgeon Dr. Rizk.

In the March/April 2013 issue of Modern Aesthetics Magazine, Dr. Rizk shared his outlook on the future of rhinoplasty in his article, “A 21st Century Approach to Rhinoplasty: A Marriage of Form and Function.” According to Dr. Rizk, a modern nose job preserves the overall characteristics of the original nose, making small alterations to straighten or refine the overall shape. Dr. Rizk’s highly natural approach ensures that his rhinoplasty work stands the test of time, simply creating a greater harmony with the nose and the rest of the facial features. His use of advanced 3D high-definition technology also increases surgical precision, resulting in reduced swelling, bruising, scarring and recovery time.

Dr. Sam Rizk repairs deviated septum, crooked nose and nasal fracture on the producer of the Anderson Cooper Today show (Patient is shown only 1 week after surgery. Her nose will shrink much more over a year.)

CBS “The Doctors” – Precision Rhinoplasty – A 3D Novel Approach for a Natural Outcome by Dr. Rizk 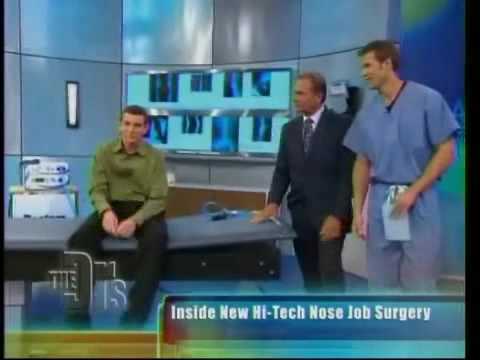 Dr. Sam Rizk, the best New York Board-Certified Facial Plastic Surgeon, talks about Teen Rhinoplasty and Plastic Surgery on the Today Show with Mat Laeur. Dr. Rizk discusses reasons behind teens seeking for plastic surgery and how it can improve their physical appearance. 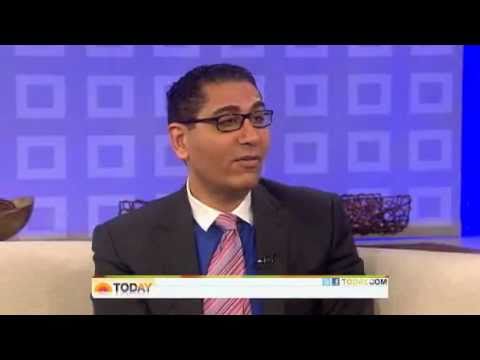 American Board of Otolaryngology